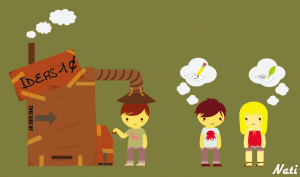 When I wrote Chasing Inspiration last week, I almost thought of it as a throwaway post. I almost didn’t put it on the site. However, the reaction to it was incredibly strong (check out the comments). Writer and game designer Todd Edwards, who is a peer of mine, fellow San Franciscan, and occasional running partner, wrote this follow-up to my original post.

I thought his post was so well written, thoughtful, and interesting that I had to give its own space on the blog. Conceiving great ideas is half the battle and I for one am glad for every weapon I can add to my arsenal.

When I started writing my first novel 18 years ago, I didn’t have any idea what I was doing, but I was good at research. I read lots of books on writing back then, and when I read Grant’s article Chasing Inspiration, one particular bit of advice jumped to mind. Orson Scott Card (of Ender’s Game fame) wrote a wonderful book on writing Science Fiction and Fantasy. One section was all about ideas. His method was to jot down ideas as he got them and then put the slips of paper in a box. If an idea ever flashed in his mind, he wrote it down. Ideas are everywhere, and by writing down every fleeting one, he trained his Idea Machine to always be on the lookout. I forget exactly what he called it, but the “Idea Machine” is what I call it.

Most of his ideas were incomplete, cliché, or boring. The magic happened when, periodically, he dumped out the box and read all the accumulated ideas. His point was that no one idea was great enough to carry a novel, but if he combined a few unrelated ideas, he would come up with something amazing and original. And by training himself to constantly be on the lookout, he had plenty of ideas to work with.

To put it in gamer terms, it’s like training yourself to see everything as potential parts for your prototyping collection. “Oh, those chopstick holders would make great walls for my wargame!” Editor’s Note: I plan to write an entire post on just this point.

I went through a sci fi/thriller phase. To train my Idea Machine, I read science news articles every day. When one sparked a plot idea, I summarized the punchline and jotted down my idea in a long-since-abandoned blog. I just checked, and it is still around:http://doctortodd.blogspot.com/.

It turns out that I kept at it for almost two years. Most of what I read didn’t lead to ideas, but I have 80ish plot ideas stored there. And even if I never use them, the process of writing them down trained my Idea Machine. Now I see stories every time I hear the news, overhear a bit of conversation at the airport, etc. Just about everything sparks a plot idea.

When my daughter asked me to make up a bedtime story for her one fateful night, it was easy to tell her something original on the spot. I kept doing it until I stumbled on the story that eventually became my first kid’s book. Then more stories which became the second book, and so on.

The bottom line is that if you train your Idea Machine for game design, soon you’ll have more ideas than you know what to do with. Granted, most will be incomplete, cliché, or boring, but some will be golden. Or maybe you’ll pull several together and you’ll come up with the Next Great Mechanic.

But that is all general touchy feely rhetoric. Here is a concrete plan of action. I’ll spare you the bullet points though. Every day, starting tomorrow, create a quick pitch for a game. It doesn’t have to be complete like an elevator pitch (see Pitch Like a Pro); you just want the core game nugget of interest. Don’t worry about implementation, balance, etc.  All you need is a quick pitch. Also, don’t limit yourself. Pitch all sorts of games. Mobile, board, browser, social, card, RPG, sport, kids, etc. Focus on themes sometimes, and focus on mechanics other times. You never know which two ideas will fit together perfectly.

Here’s my quicky idea to get the ball rolling: A wargame for kids. Consonants vs. Vowels. Consonants are more plentiful but weaker. Vowels are few but strong. W and Y are mercenaries that will fight for either side. [Note: You don’t have to post your ideas here, but do write them down. In your head doesn’t count.]

Editor’s Note: If you need another prompt, consider participating in the April 2012 Game Design Showdown on the Board Game Designer’s Forum.

3 thoughts on “The Idea Machine”