Four friends recently launched a project called FreeStarter. Why? To give away free games and thank the awesome board game community for being awesome. We also wanted to help you get to know us better. This is the second of four interviews, one with each of us. Today? We’re talking to Chevee Dodd. Me (Grant Rodiek), Matt Worden, and AJ Porfirio are also in the conversation.

AJ: Tell us about yourself. What is under that fedora?

Chevee: Dayum. Out of the gate with the snarkiness? I didn’t even get to answer the first question yet!

I’m a tall, lanky father of two little girls, who’s been happily married for 10 years. I’ve been gaming since I was in diapers and don’t see an end to that hobby in sight. I’ve been designing games since the late nineties, but have only seriously sought publication on a few different occasions… one of which landed me a deal… and from that, Scallywags was published. Post-Scallywags, I’ve been designing stuff for me, doing most of the art and graphic design myself, and releasing things through thegamecrafter.com and my own site. When I’m not gaming or designing, I like to spend time with my family, ride my motorcycle, build stuff out of wood, and play some video games.

Grant: Tell us about cornholing, Chevee.

Matt: And completely no mention of fishing … sigh 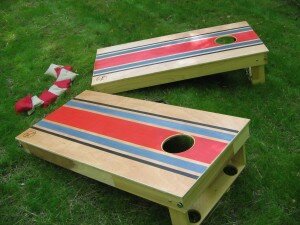 Chevee: Well, Matt might be more qualified… cornhole is about as huge as baseball in the Midwest… but, yes, I am in the process of constructing my very own set of quality cornhole boards. No mention of fishing because it’s been about a year since I last fished. I need to correct that problem… but I do love fishing!

AJ: I can totally see Chevee and Matt sitting out on the lake in a little jon boat, rod and reels in hand, not saying a word. Then one second goes by, Chevee gets a game idea, and Matt can’t get him to shut up the rest of the day! 20 game designs and 0 fish caught later, the date is over! What are some of your current favorite games?

Chevee: Well, certainly nothing I’ve designed… my regular group plays a lot of the same games and the top three are games I always enjoy playing: Settlers of Catan, Acquire, and Tichu. Some of the newer stuff we’ve tried that I really like are: X-Wing Miniatures, DC Deckbuilder, and Spartacus.

Grant: What is it you like about Catan? I’ve played it a handful of times and it just frustrates me.

Chevee: Catan is a speculation game with a good bit of social interaction and manipulation tacked on. It’s different every time you play and never fails to engage me. Maybe I’m just swooning over my first love?

Grant: No, that seems reasonable. I think you need the right group.

AJ: Tell us about the two games you’re giving away for the FreeStarter Group Hug.

Chevee: Tuesday Night Tanks… well… there’s one you’ve never heard of! I started on this design last Christmas as a silly entrant into thegamecrafter.com’s Map Builder contest. Grant already had a game rolling for it and I joked that I was going to build a game the week before and whoop his pile of crap with my awesomeness. Well… I did build the game (though I spent a few months on it), but in the end, Grant’s game got further than mine (Editor’s Note: Emphasis is Grant’s). TNT was inspired by Car Wars (a childhood favorite), Robo Rally, and Wings of War. I wanted a simple, light, tank fighting game. I think it turned out pretty darn great. 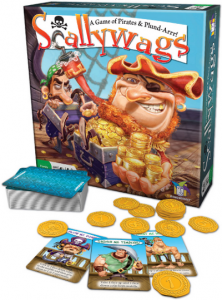 Scallywags, well, that’s the game you might have actually heard of. I designed it during a family vacation to the beach, playtested it once, and released it as a Print and Play on boardgamegeek.com. A few years later, it got picked up by Gamewright and saw publication last year. It’s been an awesome year so far and the game turned  out amazing with their art department in charge.

AJ: For the record, Tuesday Night Tanks doesn’t have to be played on Tuesday right? Although I would only play it that day otherwise it just wouldn’t be thematic

Chevee: You are free to play Tanks whenever you like. The naming is a spin on Monday Night Football and Friday Night Fights. In my fantasy world, both those things still exist and Tanks needed a night to air. The actual tank league is called CTD for Combat Tankers Division which was originally formed by the Army.

AJ: What games do you think are awesome? What makes a game incredible for you?

Chevee: I love depth built of of simplicity. The pinnacle of that sentence is Coloretto. The game literally offers you one decision each turn and sometimes it’s one of the hardest decisions you’ll ever make. There is a bit of subtle social engineering in there which is important for me also. I like playing games where I need to guess or manipulate the actions of others… for me, that adds depth. I mentioned it earlier, but Acquire also fits in this category. It is, after all, my favorite game of all time. There are very few choices to be made each turn, but they are exceptionally deep and important choices.

Grant: Everyone should own Coloretto and have it in their backpack. It’s so good. Honestly, we should swap out Farmageddon for Coloretto in the giveaway.

Matt: Chevee knows that I had already designed that game ahead of time, but just never finished it. ;-p

AJ: Ever consider Kickstarter for publishing one of your designs?

Chevee: I’ve considered it long enough to know that it’s not for me. I don’t work well with stress. I’m not good at managing things. I’ve been told that a few of my games would do great (Princess Dice especially) but I’m just not comfortable with spending more energy on trying to sell myself than designing games. I’d rather spend that time and effort making more cool stuff and let someone else handle all the business stuff. I’ve offered to let others have the games and run campaigns for them, but no takers so far.

AJ: Princess dice is really good. Yeah, I said it! I like princesses! Are you working on anything we should know about?

Chevee: I’m pretty sure anyone reading about this wants to know about everything that I do. Duh.

A few months ago, I released Leathernecks ‘43 on thegamecrafter.com. That game rocks and I’m seeking publication for it or a form of it… it’s the same game as Princess Dice. My latest project has been a betting game based around mechanical greyhound races in the not-too-distant future. I really like it, but I’ve been rather quiet about it on my blog. It’s just not a candidate for print and play because of the component requirements, but it’s certainly a candidate for publication. I’m going to be pitching it hard this summer.

Some older projects, specifically Project: Dead End and Hexploration have started to resurface and I expect there to be some new articles about them in the near future. I picked up a co-designer, Neil Roberts, on Dead End and together we have been able to take the game where I want it. I’m really excited about it again.

Matt: Leathernecks is not the same game as Princess Dice … one is Marines, machines guns and smoke grenades  – the other is Princesses, fairies, and unicorns … NOT the same game!

AJ: See Matt on the other hand is NOT in touch with his feminine side. Embrace your inner princess Matt! How did you get started in the board game community?

Chevee: In 1996 I had a chance encounter that afforded me the opportunity spending the summer demoing  the X-Files CCG with United States Playing Cards. That was the same year Settlers of Catan released in the US (still had German rules/components at Origins… I’m a hipster) and I discovered this whole world of awesome games I’d never heard of before. I was instantly addicted and quickly got over my CCG addiction to focus more on multiplayer strategy games.

AJ: I should have asked how you got into design. I love that story! Everyone should ask Chevee about it when you see him at Gencon. Do you have any recommendations for folks just getting started with design or publication?

Chevee: My most given piece of advice is to start small and get something playable. I don’t like spending hours and hours with a bunch of ideas and plans only to find out that the underlying game system is flawed or boring. Make the simplest form of your game playable and try it. Then build on that if it’s not complex enough.

For publishers? I dunno… I once heard James Ernest say: “Don’t start a game company unless you like companies more than you like games.”

AJ: Do you have any good stories or memories you’ve gained from hanging out with the board game community?

Chevee: So, a group of us were going to meet at the JW Marriott one night after the GenCon hall closed. We all gather, but one of us is missing…

Grant: Okay and that’s everything! Nothing more. Nothing to see! Huh…this reaction implicates me…

Matt: I think I was too busy buying AJ beer while he pummeled me at my own game to really notice anything else at that time. :-/

AJ: That was just ONE night?