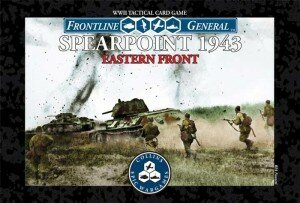 I have a lot of respect for Byron Collins and I saw his recent Kickstarter project as an opportunity to interview him. Byron is the type of scrappy entrepreneur I would like to be myself. He sets high standards, goes above and beyond to support his community (check out all the post-release content!), and has great ambition.

His recent Kickstarter project is for Eastern Front, a standalone addition to his Spearpoint 1943 game. Spearpoint is a great entry-level war game for folks interested in conflict. It’s portable, plays quickly, has tense, exciting dice rolls, some historical elements, as well as deckbuilding at the outset (like Magic, not Dominion). I own a copy myself and recommend it.

Below, my comments are labeled HG. Byron’s are BC.

HG: Tell us about yourself and Collins Epic Wargames. What do we need to know?

BC: I am a 1 man company and have been from the start.  I am solely accountable for anything that is related to my company or my games.  I treat that responsibility and our fans with great respect.  The only thing I do not fully do is some of the artwork for some games (others I’ve done all the art except the cover).  I rely on some great artists like Marc von Martial and Mark Mahaffey to carry me through on some projects.

While I will accept any failure or shortcoming I may have, I will not take credit for all of the successes.  Without great fans, these projects I’ve so enjoyed creating and bringing to this niche market- would not exist.  What you need to know?  3 things: 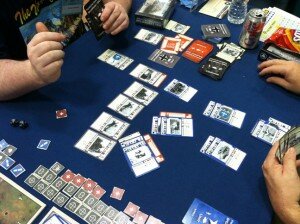 HG: Can you walk us through Spearpoint at a high level? Describe the game and if you would, give us a little history on the franchise. 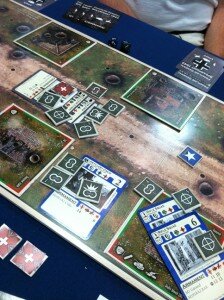 BC: Spearpoint as a system plays in two ways- one is as a fast, tactical, abstract, quick-and-dirty, portable filler wargame– when played with just the cards.  Two is as a boardgame when played with the optional Village and Defensive Line Map Expansion.  The two ways feel completely different, but have enough crossover in the rules that it’s easy to transition from one to the other.

Where the original Spearpoint 1943 is all cards (Editor’s Note: And dice for combat resolution), the Map Expansion takes those same cards, adds a few rules, and turns it into a full-on board wargame with a miniatures feel.  In fact, you can replace the cards on the terrain map with miniatures.  The line is growing.  Spearpoint 1943 Eastern Front, on Kickstarter at the time of this writing, expands the system further to a different front with all new cards and the addition of the Red Army.

HG: What inspired you to make Spearpoint?

BC: Spearpoint came about when I was demonstrating combat from my first game- Italian Campaign Introduction- which is a very in-depth game.  The combat portion was quick enough to demo at conventions to get people interested in the full campaign game.  While sitting there doing a demo, some friends in a neighboring booth said “those combat demos are working great- people love the quick combat.”  The idea to turn that portion of a larger game into its own standalone game was sparked right there.  I believe it was Historicon 2009.

HG: How is Spearpoint unique from other war games?

BC: The original has a single sheet of rules that’s really easy to pick up yet offers enough of a tactical flavor to feel like a much heavier game.  Where it really succeeds is telling a good story.  When you play the game, you will remember the “oh YES!” and “oh NO!” moments.  You remember exactly what led up to your victory – or defeat – and you can quickly relay that over a beer with friends.  A lot of wargames are “fun.”  This one is fun and accessible to the intro-wargamer.  It’s a great gateway wargame.

HG: Why did you choose to take Spearpoint to Russia? Why the Eastern Front?

BC: By popular demand.  A while back, I polled my e-mail list subscribers on “where to go next?” with several options— Eastern Front, British / Commonwealth Forces, Pacific, etc. and the fans we love chose Eastern Front.  So it’s a direct result of that poll that drove the line this direction- and I think it was a good choice.

HG: I’ve been reading more about the Commonwealth forces – they did some incredible things throughout the war. I’d love to play that expansion at some point. I agree with the vote though – the Eastern Front is the obvious next step. What is different about the Eastern Front version?

BC: The system rules are very similar to the original Spearpoint 1943 with a few tweaks.  Also by demand we’ve included tracking counters with the Eastern Front version.  The cards are all new- though some German units must repeat because to exclude them would not be very realistic (such as the Tiger I, Panther, etc.).  There are some major differences with Infantry and Crews.  Infantry and Crews are not all the same.  Before, a Tank Crew was a Tank Crew.  Now, a Tank Crew may be Green, Regular, or Veteran.  With more experience comes more ability, but at an added cost to your Reserves deck build.

HG: Those counters will really improve the experience. Great idea. Do you have any favorite movies or books that cover this aspect of the war? Did any of these inspire you in creating the game?

BC: The Rick Atkinson books are great.  Some of the US Army pubs are also inspiring.  You can find a lot of those online (if not all) such as Fifth Army at the Winter Line.  The Scenario “Man vs. Beast” in the Spearpoint 1943 Village and Defensive Line Map Expansion was inspired by Saving Private Ryan (the scene where they take on a Tiger Tank in the middle of a village).

HG: Saving Private Ryan is my favorite movie. I’ve watched it so many times. The film scene I want to capture (at some point) in a board game is Easy Company taking that battery of German .88s from Band of Brothers.

What do you think is the right balance between historical accuracy, simulation, and fun?

BC: If you are not having fun playing whatever game you’re playing, what’s the point?  It must be fun first.  It must have enough historical accuracy to feel real and be plausible.  And last would be simulation.  In my opinion, a game that tries to simulate every single aspect of every minute in a soldier’s life drowns players in those details.  I try not to do that.

HG: What are some of your favorite war games? 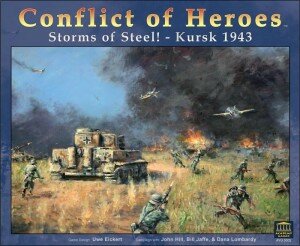 BC: Conflict of Heroes: Storms of Steel by Academy Games is a great game.  I also like games in the World at War series by Mark Walker and Lock N Load Publishing.

HG: I’ve only played my copy of Storms of Steel a little bit, but it’s such a well-designed, fun game. I’m going to look up World at War. 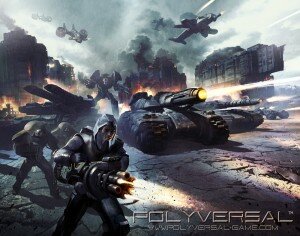 BC: Yes, that’s correct.  Polyversal is a huge leap for me.  Stepping out to publish a 6mm sci-fi mass combat game is quite a departure from light card wargames.  What’s great about Polyversal is the Poly in the name is really an applicable term.  In boxed sets of the game, we’re working with multiple miniatures manufacturers in the range of 6mm to supply minis for the boxed games.  Bringing together at least 5 manufacturers at the moment is not an easy task.  The core of the game is easy to pick up and teach.  It’s a lot of fun.

And working with the concept artist, Bruno Werneck, who did concept art for Tron: Legacy, Thor, the new Star Trek, and other movies, has been amazing.  We’re going with top notch artwork for this game and it’s gorgeous so far.  While we continue to develop the game, you may very well see a two-phase Kickstarter approach to Polyversal:

Why?  We want to break up the project into smaller chunks.  We need funding to afford Bruno’s services.  And, we don’t want to keep people waiting on a game while we rush to get artwork done as part of a production Kickstarter. That’s just not cool.  More info about the game is available at www.polyversal-game.com.

HG: Wow, really cool! Bringing in such talent must be incredibly exciting. I love hiring my favorite artists. Anything else you want to add?

BC: Yes, we have a current active Kickstarter project for our next game AND a current Boardgamegeek.com contest going for it.  Go help us out and pledge to get a great standalone card wargame, Frontline General: Spearpoint 1943 Eastern Front.  The system is fun and is getting high marks as it gains momentum. The second game in the series (Village and Defensive Line Map Expansion) is also nominated for a 2013 Origins Award in the Best Historical Boardgame category.

I want to thank Byron for taking the time to talk to me. If you have any questions for him, post them in comments below. Check out Spearpoint!

One thought on “Interview with Byron Collins”