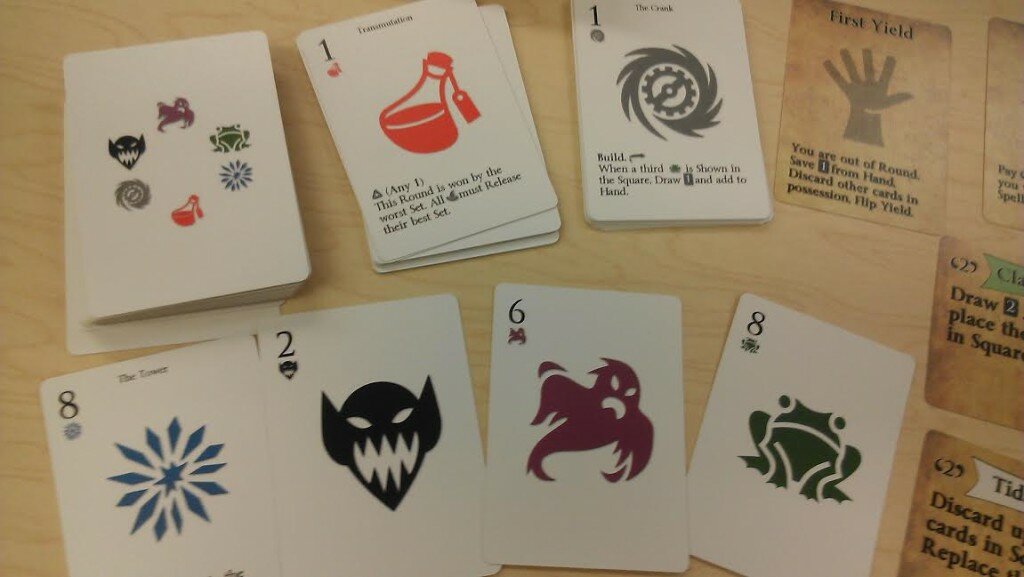 You can read the Rules for Hocus Poker here. You can download the PNP of 104 cards here. We need your help testing Arcana balance!

For this week’s Hocus Poker post, we thought we’d take a break from writing about developing the ins and outs of the game and instead write about some of the strategies and ways to play. The game has a high element of luck in the cards dealt and drawn, but that doesn’t mean one can’t be skilled at Hocus Poker.

Terminology Note: If you haven’t played Hocus Poker yet, Runes are points. Mana is used much in the same way as chips in standard Poker. The player who wins each hand purchases Runes with all the Mana spent in the round.

Grant: Something new players always miss, but more experienced players tend to grasp, is learning how to chase in Hocus Poker without spending the bank. Chip management isn’t quite as important in Hocus as you can’t get knocked out and if you lose, you’ll get more chips at the end of the round. However, every chip you waste pursuing a hand is a chip you give to the opponent who does win to buy Rune. Essentially, your rabbit hole dive is fueling their victory.

Josh: Pot management is still there, it’s just more subtle than in poker. If you can get away from an obvious loser of a hand while giving up only a couple of Mana, that’s a solid result. I always try and think of how many hands someone needs to win. If my bailing out means that they can only really afford three Runes without crippling themselves, that’s a big win.

But the equation changes for heads up play, of course.

Grant: Yes, in 2 player, the landscape really changes. If you Yield, you DO get to save a card, but you’re going to give your opponent a guaranteed Rune. You really need to consider it carefully. This makes paying 1 to The Void a better option than it typically is in a 3-5 player game. Surging is another good choice here. Spend 2 to hinder your opponent’s chances of building a winning hand. Arcana is another good way to be thrifty as choosing one for your action doesn’t cost any Mana. It preserves your purchasing power while also denying it to your opponent.

Head to head actually has a lot of tactical choices. There are fewer parameters to consider and the game is more in control of each player, whereas in 3-5 there are just more things outside your control. This makes penny, err, Mana pinching crucial.

Josh: I really like the third round Surge as the non-Archwizard in two player games. You’re basically grabbing a Rune either way, forcing your opponent into a spot where a fold is less painful and hopefully nailing down the hand.

In 3-5, a Surge is dicier. I actually like pulling those early in the round, to try and knock out some people chasing. It’s akin to a pre-flop raise in Hold ‘Em, making people pay for trying to fill in those Flush hands. If you have a good hand from the initial draw, forgoing that constructive action can still improve your odds more than a spell, by knocking out competitors.

It isn’t always the best strategy as more Mana in the pool translates directly to more Rune purchasing power, but I’ve seen a few people VERY successfully slow play (me) by using the Void and Surge. I don’t think there’s enough bluffing in the game to refer to it as a bluffing game, but I’ve seen people let me fruitlessly spin while they sit on an okay hand. I think their thinking is that they have something okay and they’re betting very little that I’ll bet more to end up with nothing. Sometimes it works. And, if me or another player is stuffing the Square with more cards, they are basically getting free cards.

Josh: There’s certainly a tendency to overrate Cauldron in particular. It looks like a free card, but your hand cards had better be on the high side or you’re just as likely to help your opponents. If I have a four-flush, with three in the Square, I won’t churn the Square unless I’m holding a high card of that suit. Don’t get so caught up in your own hand that you ignore what other people are doing. The chase can be addictive.

But the Void is a good thing to drill deeper in, I think. When do you use it?

Grant: I typically use The Void if my hand is set and I don’t want to spend more in the event things go sour. But, my first preference is to Surge to better control the board. I may also use The Void if it’s a matter of timing.  For example, if I can maximize the effectiveness of a Spell, or an Arcana, The Void is a great way to cheaply bide my time.

In a 3-5 player game, The Void is also really useful to let other people feed the Square and reveal what they have. If they are using Summon and many other Spells, they’ll Show me things, which helps me assess the situation. If I have a trash deal, I can use The Void on the first Action Phase, assess my chances, then use Spells or Yield more intelligently (to Save 1 card).

To be honest, I’m really bad at chasing. I would be much better if I used The Void a bit more often, even just to see what else will reveal in the center to better assess things. Any insights I missed?

Josh: Personally, I almost never use the Void. If I do, it’s almost always third round when I’m holding something I can’t reasonably improve, and First Yield is gone. To me, it’s a half-measure that I don’t like to take. But I’m not shy about Yielding. If I don’t think I have it, I bail to limit the pot and regroup next turn with a bigger stash of Mana.

Grant: Once another player is charged (and I’m talking 3+ players here as obviously you can’t Yield in head to head when your opponent is charged), I’m massively gun shy about Yielding. I hate the thought of giving the game to someone else who can’t keep the leader back.

Josh: Oh, I don’t mind passing the buck on that. I’ll take the extra card and force my other opponent to stay in. Not always, of course, but I’m not shy about it either. Maybe a bad move, but I try and keep in mind that I need to win several hands (at least two) if I’m not Charged, and that probably means I’m going to need help from the rest of the table sometimes.

But, as you mentioned before,  Hexis are perfect in this kind of spot, allowing you to stay in and not increase the payout. It’s one reason I usually save Hexis for rounds without a compelling reason otherwise.

Grant: A jerk move I like to do when able is if I know an opponent needs to use a specific Spell, I like to use it simply to increase its price. It’s a jerk move that warms my heart. Summon’s an easy one to peg — you can see when someone is really digging for something.

Josh: Reading what people need from the Square is huge too. There are a lot of ways to screw up the Square, and analyzing what people care about makes a big difference. I love leaving false trails there – showing a card to make it look like I’m pursuing a straight, say, when I actually might be chasing something else.

Grant: I think this is one of the most compelling elements to Hocus Poker. At its simplest, you’re wisely spending money to build a good hand. But, based on your experience with the game and skills you may bring from proper poker, elements of bluffing, deduction, and not just building your own hand, but foiling the hands of your opponents all come into play.

Timing is really important with the Spells Embiggen and Phantasm. For those not familiar, the former can turn 2 of your cards into a pair using the value of one of the cards used. The latter is the same, but the cards share suits. If you use Embiggen too early, people may Yield (and deny the pot Mana), OR, you’re telling them how to defeat you.

Josh: I can’t count how many times I’ve gotten nothing because of using those spells too soon. But, that can also be a decent bluff.

The question of improving your hand versus trying to trash others is interesting. It depends on your tools, how many outs you have, the Charged state of players, and which action it is. Oh, and of course, if your target plays after you in turn order.

Should we set up some hypothetical situations and see what we’d both do?

Actually, I’ve been sitting here trying to come up with some cool situations and I can’t help but think we should just play each other and write about it. You have game night tonight (Sunday). This seems like a good article for next week?

Josh: Next week it is! We’ve talked about Surge and Yield, and about the Void. But we haven’t talked too much about individual spells. Any stand out as particularly subtle?

Grant: I’m known for my subtle designs. I really love Abundance where you draw 2, choose 1 to keep for yourself, then 1 to give to someone else. The fact that you get to choose from 2 cards makes it worth giving a card to an opponent. But, it’s not an obvious choice, which I love.

Gust is very interesting, especially if it’s used multiple times in the round. With Gust, every player must pass 1 card to the player on their left. Typically people pass garbage, but in Hocus Poker, one man’s trash is another man’s treasure. Plus, Gust paired with the Hexis card (the name of it fails me) that lets you name a card and force someone to discard it is devious. For example, I pass a 2 to Merlin on my left. I know he has a 2. I can then play my Hexis card to force him to discard that 2.

I really love the fear that Maelstrom instills in players. Maelstrom forces everyone to discard one. However, everyone then gets to draw a new card. If you’re dealt great cards, you desperately need to play a Summon or gain cards another way to pad your hand. The best way to deal with Maelstrom is to Surge it out of the price range.

One of my favorite Hexis cards, which was originally one of our Starter Spells, is the one that lets you declare a set to be invalid. For example, if I see Josh is about to complete a Flush, and I don’t have one, I can play this card and declare Flush to be invalid. Whoops! No more Flush for Josh. But, if Josh didn’t have the Flush either, I just wasted a play blocking his non-existent hand.

Josh: I think of things like Daemonus,  Twilight, Swapsies, and others which also force cards out of hands. There’s a real cost to dropping to one Hand card, especially by playing a Hexis early, which can really mess you up with one of those other cards in play.

Grant: I love how subtly aggressive Daemonus is. Yes, sure, the recipient gets a new card, but they MUST discard a different card. If you draw garbage using Daemonus, you can really mess with folks.

I fear this post is skewing a little “inside baseball.” Tune in next week to witness a play between the self-proclaimed Hocus Poker masters. Perhaps we can organize a live game on Hangout or something?

You can read the Rules for Hocus Poker here. You can download the PNP of 104 cards here. We need your help testing Arcana balance!