The Empire of York is in shambles after a century of misrule. The imperial family has fled with what’s left of the treasury, leading the citizenry to the path of revolution and anarchy. Civil war is imminent. The old Imperial Army has mobilized to maintain order, but the old empire was vast and filled with a patchwork of cultures and factions. They aren’t the only ones with a stomach for a fight. The future of the empire will be determined in the coming months. The time to march is upon you!

I’ve long wanted to design a war game. It’s not only my favorite genre of board game, but also one of the most crowded. Not merely crowded, but it’s packed with outstanding games, ranging from the beautifully accessible Memoir ’44, the wonderful 1812: The Invasion of Canada, Heroscape, Conflict of Heroes, and recently the ridiculously innovative Risk: Legacy. 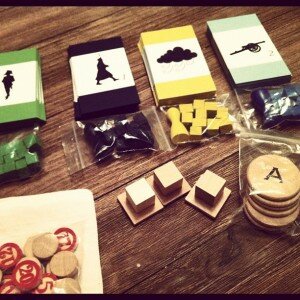 Empire of York is accessible, rich with player interaction, and plays with up to 4 players with 4 unique factions, all in a short one hour play period. The game features no dice and instead gives each player an Army deck using 5 simple card types: Infantry, Cavalry, Artillery, General, and Fog of War. That’s it.

Cards are played to add Reinforcements to the board, but more importantly, to activate powerful Tactics and Staff Orders. These do things like Infantry Charges, Ambushes, or sending the enemy False Orders. The uncertainty of the cards drawn paired with the actions of your opponents will allow for a great deal of variety that’s easy to learn. If you’re put off by war games, here’s a secret: Empire of York is actually a light area control Euro with a heavily incorporated war theme.

All told, Empire of York is a unique war game that works just at well at lunch, game night, or the Thanksgiving table after dinner. The game is deep into beta and balance testing now.

If you have any thoughts, comments, or questions regarding Empire of York, please . I am looking for a publisher, so don’t be shy!

Below are some helpful links! Please keep in mind that everything is in progress. Also, all art images on this page were obtained using Google Image search. They are purely reference and are not final art.

You can download the Print-n-Play version of the game here.

12 thoughts on “Empire of York”