A friend of mine has been thinking about a game for years that lets your group play as the crew of a starship bridge. Each player would play his own mini-game that determines his station’s performance and the group’s individual successes would add up to determine how successful the mission is for the whole team. And then Stronghold Games printed Space Cadets. It’s not just the same theme and execution, there are even specific mini-games in common. He was understandably disappointed and I knew exactly how he felt because I’ve been there. A lot.

I was able to console him with the reassurance that this happens all the time. I’d be surprised if every one of you hasn’t experienced something like this yourself. Which is why I want to reassure you that’s it not just you. I call this phenomenon Convergent Design, after Convergent Evolution, the idea that animals with little-to-no evolutionary relationship have developed distinctly similar features through unrelated paths, largely because those features are fairly optimal and their development inevitable.

Joseph Swan and Thomas Edison independently invented the lightbulb within five years of each other. Lincoln, Abraham Lincoln, Vampire Hunter, and Pixel Lincoln were all released within a year of each other. The same year I finally got publisher traction for Assault on Khyber Station, I found Escape from the Aliens in Outer Space on a dealer’s table and a week later I heard people raving about Escape, which turned out to be The Curse of the Temple. While that last one is more coincidence than a duplicated idea, you can still see a clear trend. Even Space Cadets isn’t alone: Artemis is the same idea for the PC and Spaceteam for iOS.

I attribute it all to the global zeitgeist. While every human is as unique as a snowflake, we all consume the same media and participate in the same culture. Modern communication has reduced the latency of this effect from years to mere minutes and even mitigates the previously large cultural differences between nations and continents. With several billion people laughing at Seinfeld and holding their breath for Harry Potter, it’s no wonder that a few of us are going to wonder “Hey, what if you could set reminders by location instead of time?” all at once.

In the Unpub zone at GenCon this year I watched a Rick Collins game, Scrapbots, in which players build robots from junk and battle them against each other. Each robot’s abilities and well-being are defined by card slots in their hit locations (head, chest, arms, legs). In one fell swoop, I saw two of my designs preempted. I might have been crushed, but I’ve been in this position often enough to know not to take it personally. Instead, I laughed that I never did get around to developing either of those games, so if my goal was to see those ideas realized, I just got a present. I save hours of headache and hard work while someone else does it all for me, and I’ll get to just buy his game and enjoy it already completed. Thanks! 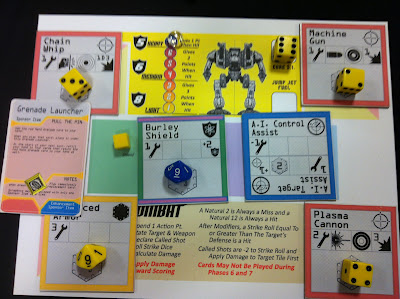 Now, I am being optimistic here. If the game does get published and is as awesome as it can be, then all is well. If, on the other hand, the game fails to be published, not only am I back to square one, but I basically have no chance selling the game to the publishers that turned down the original. And if Scrapbots does get published but turns out to be bad, then I’m really screwed: I won’t have a sweet game to play, I won’t have my desire sated to see those ideas well-realized, and making the game myself to do it right would be a fool’s errand because no publisher will want to touch a game seemingly derivative of a well-known flop.

When I was 15, Wizards of the Coast was accepting external Magic set submissions. I put together something I’d be too embarrassed to show anyone today, but with a few solid ideas in it just the same. The same year I mailed that off, they announced the big policy change and stopped accepting anything. I never got a response whether they even read my stuff. But that Summer, they released a bunch of new cards and mechanics that they obviously stole from me.

Except they didn’t steal them. I know this because it takes considerably longer to develop, template and print a card than the time they had to steal my idea.

Last year, I led a team that designed a Magic set that I am quite proud of. Not only were there a half-dozen nearly identical cards printed in Wizards’ version of the “same” set, there were cards released while we were still working that matched brand new designs and forced us to remove or drastically change them.

And that wasn’t surprising, because not only were we working in the same medium (this ubiquitous magepunk TCG) with the same frame of reference (the preceding 18 years of Magic sets), but we were even working within the same parameters (to design a flavorful core set that’s easy for new players to learn but interesting for established players to draft) toward the same goal (to lead into a multicolor-themed fall set named Return to Ravnica). In fact, one of the reasons I consider the project successful is the number of solutions our team shared in common with the Wizards’ team. If we hadn’t hit some of the same touchstones, it would have been a sign that we were off in our understanding of where Magic is and where it’s going.

When I go back and apply the same logic two decades ago, my old anger at having my ideas “stolen” is replaced by pride that even as bad a designer I was at the time, I was still on track enough to come up with the same things the professionals did. When Jason Tagmire learned about concurrent Lincoln movies, he used that as fuel to help market Pixel Lincoln. When Edison learned about Swan’s work, he sent goons to eliminate his competition. Wait, bad example…

The point is, it’s up to you how to respond when someone beats you to the punch with your own idea. You can throw a fit and let it eat you up inside. You can take it as validation. You can thank them for saving you the effort. And you can even team up with them and use it to your advantage.

You might even reevaluate what it means to ‘own’ an idea. But that’s another article.

D'oh! Present company excepted of course! Odd how I actually don't think of Farmageddon when I think of "farm games" though. Huh. I wonder why that is.

I guess many Farming games tend to be simulators. More complex. It's a very rich topic with many built in features to mechanize. Farmageddon isn't remotely a simulator and the crops have eyeballs. Maybe that's why? I think we typically think Agricola with farming. So many people compare Farmageddon to the very different Bohnanza, perhaps because they both basically use Farming as a theme and premise, but not to simulate?

Hey! Be nice to us farming games!

"And if Scrapbots does get published but turns out to be bad, then I’m really screwed."

I've always found this to be the most unfortunate fact of mass producing entertainment. When a cool idea has been executed poorly, that's the *best* opportunity for a remake. Yet it's rarely the execution that takes the fall and the cool idea suddenly becomes toxic. Thus, we get a dozen farming games or games set in the Mediterranean sea trade. :P

Stay in the Loop