Here are my Interview/Kickstarter Promotion and Review policies. Please read.

Me on a panel at the Santa Clara UnPub/Protospiel.

I chose Hyperbole because my enthusiasm for games verges on the hyperbolic. I fail to dip into things with moderation and games and my efforts in design are no different.

Writing and playing games have dominated my free time for years. During the past few years, I’ve fused the two disciplines into game design, which is a far more difficult, yet satisfying beast. It is the combination of refinement through user testing, imaginative art and graphic design, cleverness, and a desire to entertain and tell a story that excites me.

My first signed title, Farmageddon, was published in 2012 by 5th Street Games and won a Parent’s Choice Award. The second printing is now available via my publisher, Amazon, online game retailers, and your local game store! The first expansion for it should be available Winter 2014.

My second signed title is unnamed at this time and will hopefully be announced soon. I’m seeking a publishing partner for my story-driven tactical fleet combat game, Sol Rising, as well as my card game Hocus Poker, co-designed with Joshua Buergel.

I love to design and develop games and I created Hyperbole Games for a few reasons:

If you want to discuss one of the games you read about feel free to . Thanks! 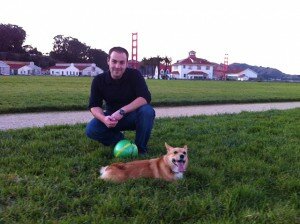 Grant with Peaches, the Hyperbole mascot

If you are interested in what I’ve said about games, I’ve been interviewed a few times: