Frank Herbert’s Dune released in 1979. Based on the novel of the same name, the game was, and still is, considered to be one of the best games of all time. On BoardGameGeek the game is currently ranked 109 overall, 21 for thematic games, and 75 for strategy games. This is an incredible legacy for a game that is now about 35 years old if my math serves me correctly.

In 2012, Fantasy Flight Games released Rex: Final Days of an Empire. They licensed the mechanics, developed them, but were unfortunately unable to attain the license, hence their use of their wholly owned Twilight Imperium universe.

Before I go further, I want to provide context. Dune is one of my favorite books of all time, easily top 3. I’ve read it multiple times and am currently in the middle of re-reading the series. I love this universe. One of my side projects for the past few weeks has been to chase down an original copy of the board game, almost purely due to my love of the franchise, cost be damned. As luck would have it, my friend Josh had a spare copy (what?) and I had some games in which he was interested. The trade hath commenced.

This past Sunday I played Rex for the first time and just loved it. I should have played it years ago, but I must admit I was turned off by its reputation. I expected a 35 year old game to be a clunky mess, and, paired with FFG’s reputation for very complex games, I think that’s fair. But, the game was anything but. It was actually simple, incredibly thematic, and very deep. Yes, I’m a very experienced board gamer now, so simple is a relative mark.

The thematic intuitiveness of the actions and characters was so strong I could identify Dune’s fingerprints throughout without having read about the original game. I could practically taste the spice. I didn’t see Rex’s characters, but those of Dune. I just loved the game and found myself on BGG reading the rules for Dune the following morning to see the differences.

I began taking notes to email my friends about the differences between the two versions and it was a very fascinating exercise. It provided a glimpse as to Fantasy Flight’s thinking as they developed the 1979 game for 2012. It seemed like an interesting, though admittedly niche post, to analyze these things.

This post will be more interesting if you’ve played either Dune or Rex, or have at least read either of their rule books. Familiarity with the fiction will also help.

Final Note: This is NOT meant as a gameplay or strategy analysis. Absolutely not after a single play of one of the games. Also, I might get a few notes wrong. If this is the case, please leave a comment and I’ll correct it!

A quick overview to Dune and Rex. This is meant to give you a general idea to how the games play. It is meant as a summary for the purpose of this article, not a conclusive run down.

The board is divided into territories, some of which are strongholds. The game is won if a player controls a certain number of strongholds. Players may ally and they win together if they control a number of strongholds together, which is in excess of those needed for a solo victory. Alliances can be broken and changed at specific times in the game.

Every player has a unique, asymmetric ability that outright breaks the game. This is from the team that brought you Cosmic Encounters. It made me giggle even before playing the game.

Every round follows these steps (orders vary between versions):

The game is a fairly straightforward game of managing your income and units to hold territory on the board and maximizing your character advantages. It is, however, full of deception, unexpected moments when people cash in their secrets, and treachery. 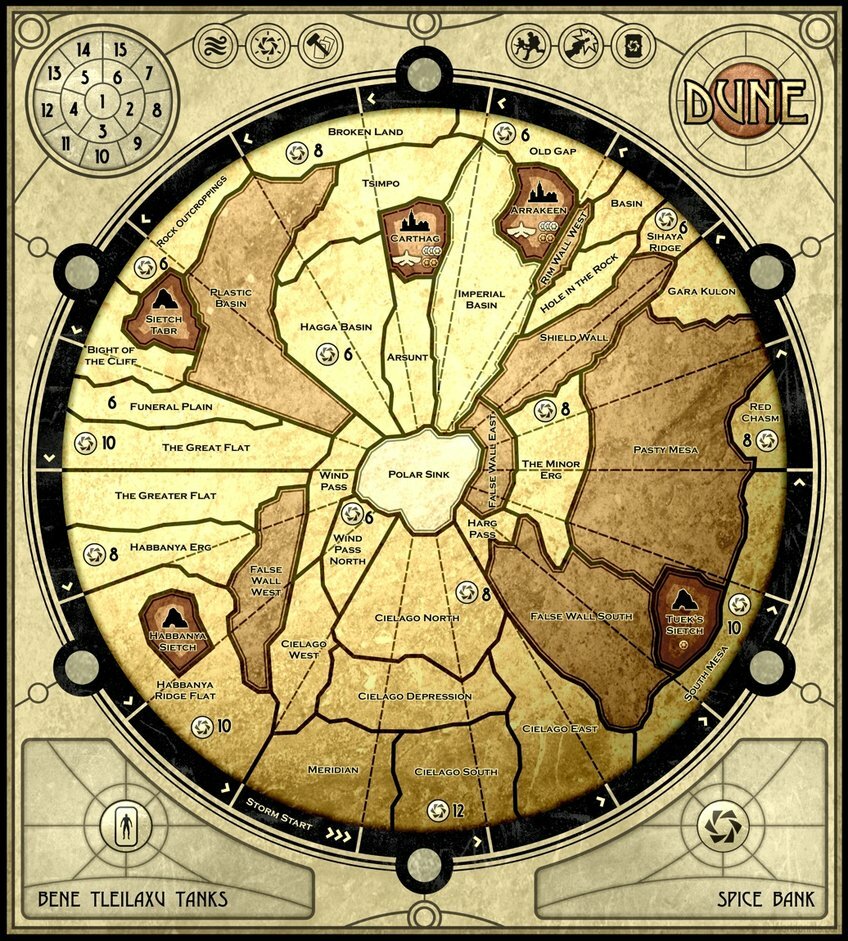 In addition to the main game, Avalon Hill released an advanced set of rules to develop the game further. Some elements of it are considered essential to the experience, whereas others are quite controversial. I’ll only discuss the ones that pertain to Rex.

My Analysis. It seems very clear that Dune, overall, is a slower game, based primarily on its economic tuning. Units cost more to add to the board, they take longer to bring back from the dead, there is less money in circulation, no default income except when you are broke, and leaders are more difficult to revive.

The game, in this sense, is probably played with greater attention towards long term planning. Units are sent to battle more cautiously. It also gives a very big incentive for gaining the treachery cards (battle modifiers) and killing leaders via traitors. In our game of Rex, the cost of the Treachery cards was generally relatively low, primarily to hinder the player gaining the income for their purchase. I think if Treachery cards hold more weight, this bidding phase will be more lively and compelling.

For my personal tastes, and I think modern tastes in general, cutting the game in half (from 15 to 8 rounds), making sure everyone has income, and increasing the rate of bringing back troops seems to have the advantage of speeding up the game with fewer negative consequences.

However, I believe the best version of the game is a bit of the advanced Dune with some notes from Rex. 10 Rounds, with the Carryalls and Smugglers, 2 Spice blows, and binding negotiation throughout seems to be a really strong way to play. Regaining Traitors and having a bounty for killed leaders looks fantastic and really puts a proper edge on conflict. Also, with the troop limitations, but a little more income, I think it leaves a little currency for bribery and increasing the bids on the treachery cards, which then increase in value.

But, economics aside, it’s difficult to ignore some of FFG’s improvements. The new board is far simpler and in the best way. Having a guaranteed first player rotation might remove a layer, but it’s not one I think most people would miss. Shifting counter-clockwise to clockwise is just an obvious choice.

Some of the tactical decision are, I think, streamlined in the right way. Instead of stronghold versus non-stronghold, FFG put the increased deployment tax on enemy-held regions, which means you can move into open spaces freely. This makes them quite valuable, but you can’t just hot-drop into an enemy space without paying. They also swapped the order of movement and deployment. Therefore, while speeding up the game’s flow, they still preserved some difficult decisions on where and when to allocate troops.

I can’t wait to receive my copy of Dune. I fully plan to play it with a hand-picked assortment of rules to find the right balance of theme and mechanics. What a great game!

Conclusion. If you were to bring a classic into the modern era, what would you change? What would be your game of choice? Would you prioritize pacing and overall game length, reduce complexity, or seek to improve balance?

This also forces one to ask what must be preserved for the fans of the original. What considerations must be paid to new players? In fact, when you’re revising a classic, do you give consideration to the existing fans as customers at all, or do you plan to sell to a new generation? Money dictates planning and this is a great case where that’ll come into play.

Fantasy Flight have quite a bit of experience with this, with the list including Rex/Dune, Nexus Ops, Fortress America, Horus Heresy, and surely others.

I hope you enjoyed this lengthy piece. It’s a little different than my standard fare. My hope is that it has provided context to you for thinking about not just classics to revise, which is unlikely to be something you deal with, but revising your current designs to be more appealing to the current market. The ability to develop, revise, and iterate upon your design never really goes away. You really just have to choose a direction and stick to it.

19 thoughts on “The Evolution of Dune to Rex”