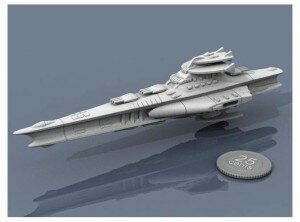 I’ve just had a flurry of what I think are good ideas for Blockade. If you’ve played the game, please read this because I want your input. The first idea is simple, but it led to a bigger idea. The idea is to allow for synced, focused fire. Here’s the rule:

If your activated squadron attacks an enemy that is within range of a second squadron you control, you may roll dice for BOTH units up to the cap of dice.

The reason for this is to reward good maneuvering and thinking ahead. You only activate one unit at a time, so you’ll need to think a few turns ahead to corner a unit. It also rewards you for not getting stuck in between two enemy ships.

Secondly, it lets you fire more dice, which makes the game more explosive, decisive, and faster, but it caps out (3 critical dice, 4 greens, 5 yellows). It’ll be a clear advantage, but not ridiculous.

Finally, it puts even more pressure on the player to properly arrange his formation. If you open up, and I mean really open up, you better be ready to suffer hot, laser death from all sides.

If you’re with me at this point, you see my mind is abuzz with intergalactic, metallic warfare. Things should explode and quickly. Let’s continue.

I was browsing Shapeways after this, mostly because I love miniatures and starships and losing money. Irrational Designs is one of my favorite sculptors with such a great collection of models. I kept wondering how I could get ships like these into Blockade (mostly for a prototype, they are cost prohibitive for a published version), but kept running into a few issues:

I started pondering this. One of the issues with the current game is that the board gets crowded. Plus, moving around all three pieces in formation can sometimes be a tinge fiddly. I’m also balancing these thoughts with the fact that I’ve been pushed to add more customization to the ships/fleets, potentially more functionality, and I need to rework the components. Pegs and wooden blocks aren’t going to work necessarily.

I had a few thought cycles.

So, to refresh, this is what this means: There is still the same spatial arrangement mechanic, but you represent your ship’s location and facing with a single piece and do the specific manipulation on the cards in front of you. Other players don’t really need to know what you can fire, but they DO need to know where your weakspots are. I’ll either need to make this clearly visible on the cards or perhaps there will be a token you place on the board to say “I’m weak here.”

Because I’m using cards, I can add more precise and clear information on the cards themselves (ex: Move: 3 or Damage: X, X, Y, Y) AND add advanced complexity for fleet building and advanced play.

Does this all make sense? Poke and ask questions if you’re unclear. I think this is “the next big step” I’ve needed for the game. It’s purely a presentation issue, but it opens up so many possibilities.