I’ve been playing a great deal of Memoir ’44 lately. It’s one of my favorite games and one in which I’ve invested heavily. I own all but one minor expansion for it. Memoir ’44 is a very simple rule set and foundation, but it’s scenario driven and covers the broad scope of World War II. This means there are dozens of tiny one-off exceptions that abstract the variety of the war.

I was struck by how simple many of these are, while at the same time, how great their impact is on the experience. I wanted to talk about these tiny exceptions and how they are tiny rules of significance. Key to note, as this is surely confusing, is that I’m not talking about simple mechanisms that are the core of the experience. Hanabi’s rule where players cannot see their own hand is very simple, and very significant, but not the topic of this post.

Commissar Rule in Memoir ’44 Eastern Front: In the early years of Russia’s involvement in World War II, their officers and leaders were greatly encumbered by political commissars. These men and women were more or less spies of the Stalin regime, not professional soldiers, and more interested in absolute loyalty than effective command. It is not absurd to say that millions of Soviet citizens and soldiers died due to incompetent, bureaucratic, and ideologically driven overrides from the commissars.

In early war scenarios, players fighting for the Soviet side must tangle with their own Commissar. This is represented as a red poker chip with a sticker on it.

Here’s the normal rule: On your turn, choose one card from your hand to play. Resolve its text. Draw a new card at the end of your turn.

Here’s the commissar rule: At the start of your turn, reveal the card played under the commissar chip the turn before. Before you resolve it, choose one of your current cards for next turn. Resolve the previous turn’s card. Then, draw a new card.

Essentially, instead of being able to react to what your opponent just did, you must plan ahead. You also have fewer cards from which to choose. Finally, there is a delay until you can use the amazing card you just drew. I bet you hope you’re still alive in 2 turns to use that artillery bombardment, eh comrade?

Tiger Tank Rule in Memoir ’44: Tiger tanks were vicious enemies in World War II. They were monstrosities of metal that shredded the tin-can like American Sherman tanks. Their weak spot was famously the rear, though occasionally a lucky shot might penetrate or hit exposed ammo. If you’ve seen the movie Fury, there’s an incredible scene in which 4 Shermans take on a single Tiger. It’s thrilling.

To abstract how tough and monstrous these beasts were, Richard Borg made a few tweaks.

A typical tank unit has 3  models, which means it can sustain 3 hits before it is destroyed. 1 of the 6 die faces is a tank and 1 of the 6 is a grenade. The tank face kills tanks and the grenade face kills anything. This means you have a 1/3 chance of killing a tank with every dice roll. Tanks attacking a tank unit (without terrain involved) roll 3 dice. Infantry roll 1-3 dice based on range. Artillery roll 1-3 dice depending on range.

For Tigers, there is a single model. It can sustain only a single hit. However. When a Tiger is a attacked, you must re-roll all hits (tank and grenade symbols). With the re-roll, you must roll at least 1 grenade (1 and 6 chance). If you don’t? No damage is dealt.

I can tell you right now, that one simple change beautifully abstracts these terrors in game.

Hero Rule in Combat Commander: Europe: Combat Commander is a game of managing battlefield chaos to execute decisive maneuvers and assaults to silence machine gun nests, eliminate exposed units, and oust entrenched soldiers. One must cautiously prepare their assault with maneuvers using smoke grenades and terrain to protect their units. Why? Every unit killed is one that cannot attack the enemy. Damaged units are far less effective in combat. Finally, killed Units award victory points to your opponent. 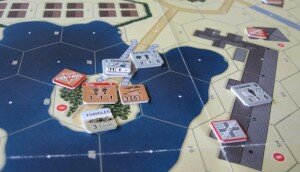 Enter the hero, a dynamic event driven unit. Heroes do not award victory points to your opponent with killed. This means you can send them on a suicidal charge to a machine gun nest. They might still die. In fact, they will probably die. But, in the same way many battlefield heroes put the lives of others before their own, so do your heroes in Combat Commander.

In this fantastic design from Knizia, players choose one card from their hand to Auction off. The card defines the auction type. After the fifth card is played for an artist, the round ends immediately.

The Double Auction does quite a few things, including:

Every auction in the game has a time and place. Choosing when to use them is the tactic and strategy of the game. The Double Auction is a really fascinating exception to the one card standard.

I asked Twitter for their suggestions. Here are a few!

Valley of the Kings: This one from Eric is in sequence. Read from bottom to top.

Brass: This is a lengthy, but a good one. Read from bottom to top.

Much emphasis is put on design elegance and simplicity. People treat exception as a bad word fit only for junior or poor designers. That’s absolutely not the case! A key decision for your war game, euro game, filler game, is when to introduce an exception so spicey, so important, it fundamentally alters your game.

Hopefully these examples set your mind spinning. If you didn’t like the examples I shared here, share some new ones below, or check my Twitter feed for others. Potent exceptions are amazing — seek them out and elevate your design.

2 thoughts on “Tiny Rules of Significance”